PONY 14U™ LEAGUE is the transition league that takes players from the "kid" leagues to "young adult" status. It permits a player to play on a diamond tailored to his size and capability rather than being moved to one with twice the playing area in a single year. PONY 14U™ LEAGUE is specifically designed for the player in those very formative early-teen years.

The vast majority of players of league age 13 simply do not belong on a full-size diamond. At the same time, they have outgrown the dimensions of the "kids baseball" diamonds used in BRONCO LEAGUE and other "12-and-under" programs.

PONY 14U™ LEAGUE was founded for this very apparent reason. After becoming skillful players in the younger leagues, players in their early teens found themselves unable to compete, to play the game of baseball as it was intended to be played, on the regulation size diamond.

With bases set 80 feet apart and pitchers throwing from 54 feet, PONY 14U™ LEAGUERS play one of the most fascinating games in all of youth baseball. Well beyond the beginners stage, they have mastered all but the finest points of technique and strategy and can play the game with a skill comparable to that of older players, if you let them play it on a field specifically designed to match their physical limitations.

FAIR PLAY AREA : Within the first base and third base foul lines and a fence or marked line 250 feet from home plate. A ball hit beyond that distance on the fly will be a home run. A minimum home run distance of 200 feet or a maximum of 300 feet will be recognized, with the recommendation that the home run distance be 265 feet at the foul lines and 315 feet in center field to a six or eight foot barrier wherever possible.

BASES, PLATES : The home plate, pitcher's rubber and the bases shall be official size as used in regulation baseball.

PITCHING MOUND : Shall be raised by a gradual slope to a height of eight inches above the level of home plate and the base paths.

DISTANCE TO BACKSTOP : Recommended distance from home plate to the backstop is 40 feet. 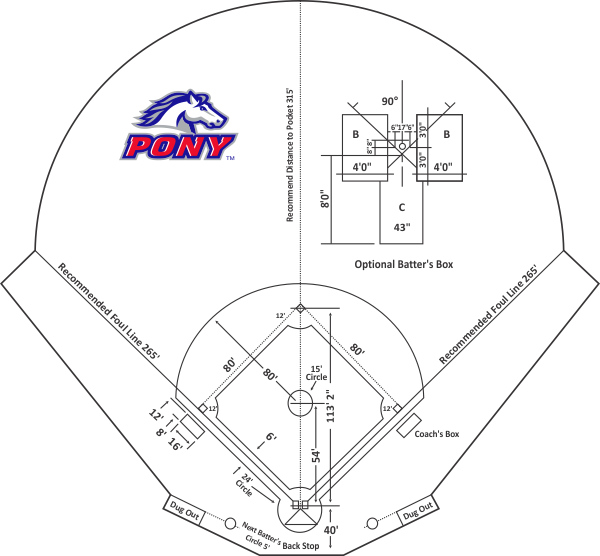 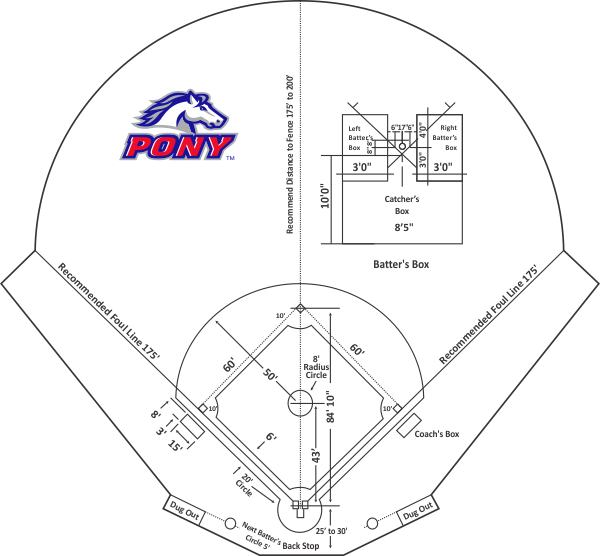 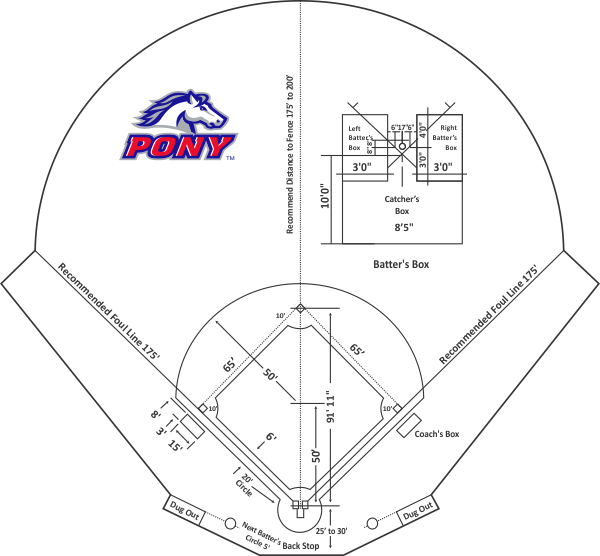